I always try to be a person of character. That was a strong message my mom always taught me. I may not say or do all the right things but if I try to be honest with myself and do what is right, I can never go wrong. That sometimes means stretching yourself and doing whats uncomfortable just because its the right thing to do.

Unfortunately for me, that meant going back into the grocery store and having them blast over the intercom that this idiot hit some stranger’s car. For the second time in less than a year (maybe its saying something about my career choice as a stay at home since this has never happened prior), I hit a non-moving car. I could potentially win biggest idiot of the year, since not long ago I also flooded our old house. 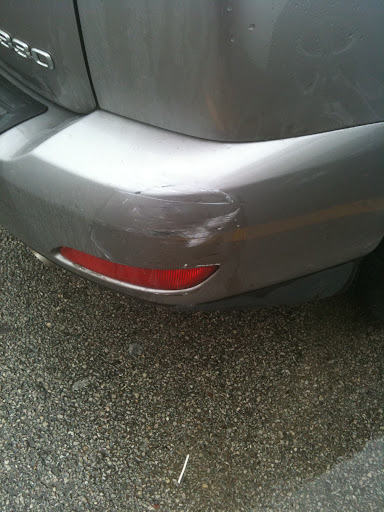 It could not have come at a worse time. With long lists of house work, impending camp costs and new seasonal clothes, I need this from a financial perspective like I need a hole in my head. So I may have acted like a person of character but I really feel like a person who needs a new brain.

After over an hour of waiting for the Police to do their thing, yes they made me file a police report, I don’t feel any better than the moment I realized I’m an idiot who belongs in a padded cell. And if I haven’t given my husband reason to divorce me enough times, this extra scratch along the opposite side of the first one isn’t going to be the nail in the coffin. Or is it?

On the flip side, I just come back from conferences at Drew’s school where got a glowing review. And it was even noted that he would not have made the progress he has if it weren’t for my involvement 🙂 Maybe I’m not a complete idiot…then again maybe I am 🙁

« « Be Careful of What You Wish For

Does being single longer make you a better married person? » »