Time is such a funny thing. How in some ways something could seem like it went so fast, yet you can’t remember life before. That pretty much sums up the last seven weeks, which I’m afraid will become the last seven years…seventeen years, etc. before I know it.

As much as people tell me to enjoy the moment, it’s hard not to look ahead to an easier, less complicated time (as if life with three children is going to be easier and less complicated EVER). I had set six weeks as a subconscious milestone I was reaching for. The chance to go to the doc, get the go ahead to resume life as I knew it.

Surprise, life will never be as I knew it again. Things have been redefined. And as I left my appointment, I realized (DUH!!!) this also meant that my baby is six weeks old (actually seven weeks today). A panic rose through me…how is that possible? He was literally born yesterday! But then I started thinking about how very different my life was seven weeks ago. 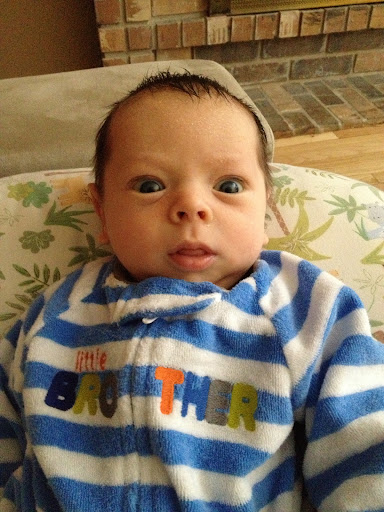 Despite the fact that I couldn’t bare to move my enormous body, things were more simple. Did I really just say that?! I could rum my errands whenever, even if it meant toting around two kids. A day of hanging around the house only meant playing with dolls and seventeen rounds of Chutes & Ladders. Never in those days was I carrying a baby around, reeking of spoiled milk spit up or forced to stop every two hours to take my boobs out of my shirt.

And somehow as I thought about life pre-Noah, a haziness fog swept over…and not the sleep deprived fog I normally have. It was as if I am already disconnecting from that life. The life I was so familiar with, the life of 2 kids. I may be far from familiar with this life of three kids but it’s starting to feel like my life.

So when the doc told me to resume life as I know it, I realized how much that has changed for me. And in such a short time, it feels like an eternity since things were as I knew it. I’m looking forward to things being more settled but it will never be the normal I had before. But it will come. But I will never get these six weeks of my new child’s life back. So maybe I should focus more on that – what’s happening now, then what the next six weeks will bring me (hopefully more sleep).