Someone’s Got a Boo-Boo

Not sure if you heard the news, but Gabby has a boo-boo. Nobody’s quite sure how it happened, or what the boo-boo really is but it for surely requires a Princess (a.k.a “Ya-ya) bandaid. It needs to be placed just under her chin, ironically in the exact same spot Drew just got stitches. Hm… 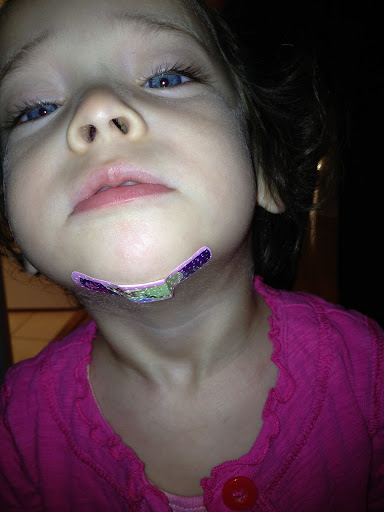 Friday night started out like an average Friday night in our household. Friends came over and the kids were running around like normal little monsters. Even after tears were shed, nobody anticipated anything more than “so-and-so took that toy from me,” “Gabby back handed me,” “Drew called me something nasty about poop,” you know…normal play date tears. Except that they seemed to last a little longer and upon inspection blood was involved.

Minutes after the four adults got involved, it was a unanimous decision that our very first trip to the ER was necessary. It’s not that my insanely rambunctious four year old has not suffered injuries (there were in fact two urgent trips to the doctor’s office in his earlier years – one requiring steri strips and the other involving a tooth bulging out of the gums in an unnatural way due to falls). However, this was our first ER visit.

The excitement Drew had over making the trip propelled his shoes on his feet at record time. I’m not sure it was the undivided attention of both his parents, or the thrill of the hospital, but Drew did not stop talking from the second we got into the car until he fell asleep after 11pm. And who knew that the hospital came equipped with Superman stickers, coloring books and staff that were hungry to please a banged up four year old?!?!

Even the five stitches that made mom insanely queasy were no problem for Super-Drew! He laid down, braced himself and did not shed a single tear! 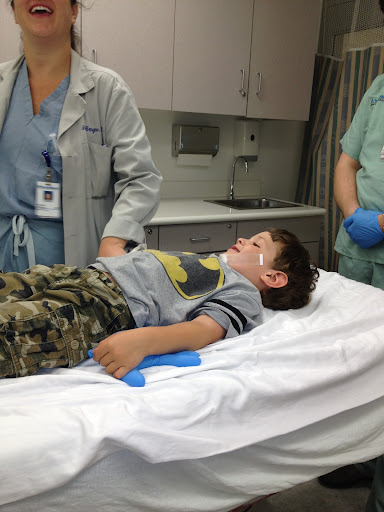 It wasn’t until he was told that he couldn’t go to his friend’s birthday party the next day that the water works came into play. Nobody could believe he was such a tough guy!

The only mystery to the whole accident is how Gabby, who was sleeping during the entire trip to the ER, managed to get her boo-boo. We are opening a tip email at mommystwocents@gmail.com for any insight on the matter.

2 thoughts on “Someone’s Got a Boo-Boo”