Back in the day when I was idealistic about being a parent (probably some time BEFORE I actually was one), I assumed that I would carefully screen every program my children were exposed to. I would carefully make sure there was no inappropriate subject matter. I would make sure that any topics that might have some level of controversy were discussed after the episode and used as a learning experience. I would have been a vigilant parent in making sure that everything was age appropriate and exposure to screens was a continuation of their ongoing learning experience.

Fast forward to this morning when child #3 is hysterically laughing at some inappropriate raunchy cartoon on the Cartoon Network. I stopped for a second, probably the first time I’ve looked at a cartoon in years, and took in the content. It’s not that cartoons have not been on in my house, it’s more that cartoons are on when I have something I need to do away from my children.

Need to take a shower? Put the toddler in front of the television. Everyone comes home from school or camp and needs dinner, put on the television so I can cook it. And so on and so forth. The TV has become a babysitter for my overly active, highly rambunctious little people. It gives me a second of peace and it allows them to stop running around, wreaking havoc on our house and take a breather.

There are certain television shows or stations that have earned my confidence. PBS, for one, is a reliable provider of suitable content for children of all ages. If only I could get my children to only subscribe to Sesame Street, Cailou, or my personal favorite – WordGirl, I could rest assure that all was well. But that is not the case. 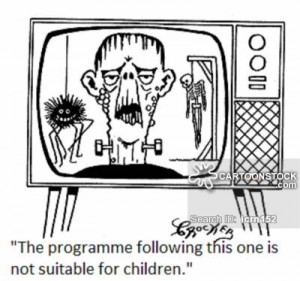 ‘The programme following this one is not suitable for children.’

This is clearly nothing new. Whoever thought up the idea for Tom and Jerry had some serious rage issues. What about that Road Runner from Bugs Bunny? If any children tried those stunts, there would be serious trouble. Violence and inappropriate content for children has been an issue for a long time. It just seems that nowadays we are more aware of it. We are more aware that exposing our children to bad things may negatively influence our children.

I don’t have enough time in my day to make sure my children brush their teeth, let alone screen their shows ahead of time. My 8 year old can navigate the remote better than I can. The idea of canceling cable and restricting them to prescreened DVDs sounds nice now, but I would NEVER hear the end of it with my kids. What’s a mom to do? Is it too much to ask for suitable programming at 10am in the morning so mom can take her shower? 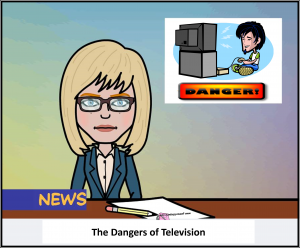 One thought on “Suitable Programming”