Careful what you wish for…

When people would ask me how I felt about my oldest going to kindergarten, I would laugh…no big deal!  For one, his preschool day was longer than his half day kindergarten class.  Secondly, I was so accustomed to running him to his myriad of activities to keep him busy that my life was going to be pretty darn similar.

Last night our board of education voted in full day kindergarten – yipppeeee!!  Or not?  Kindergarten just became a totally big deal in ways that I had not prepared.  When Gabby graduates preschool, she is going full force into her public education.  As much as I didn’t like how short the day originally was, I don’t know if I’m prepared for her to be gone everyday all day! 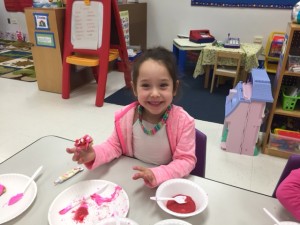 When does she do gymnastics, ballet, hip hop, poms, broadway bound??  Does that mean we will never again have a 1pm snuggle session on a Monday through Friday while the baby is sleeping?  Be careful for what you wish for…

All of a sudden, Gabby just went from being a baby to a big girl.  She’s going to be restricted to only doing a couple activities after school…and even that may be hard since she’s never been forced to focus or be in one place for so long.  She still occasionally falls asleep during the day.  How’s that going to work?

I can’t help but feel a little like both Gabby and I were robbed…a bit.  We were robbed of an extra year of playing around.  I think it’s the right decision in the long run for everyone involved but I’m just not sure it’s the right decision for us in the immediate sense.  That doesn’t mean that I’m going to hold her back from participating, I just might be holding on a little tighter on the first day of school 🙁

One thought on “Careful what you wish for…”