As we were walking into Temple for the Jewish New Year, Drew casually mentioned that he didn’t believe in G-d. Adam and I instantly looked at each other and said, “it’s time for Sunday School.”

My religious beliefs have less to do with what the Bible does/does not say. Rather, I believe in perpetuating the traditions that my family has done generation after generation. That is something more concrete that I can put my head around. Obviously the traditions we practice are based (loosely – like gefilte fish) on the rules and suggestions of the Bible but for me it’s more about my family.

I’d also like to believe that there is a higher power up there. It’s consoling for me to know that there’s something larger than just us. Therefore, I spend a lot of time asking a heck of a lot from that supreme being. Please keep my family healthy and safe, yadda yadda. And I wouldn’t be Jewish if I didn’t feel some sense of guilt for all that I ask from this supreme being and all that I give back.

I send my kids to Jewish preschool. I intend on Bar/Bat Mitzah-ing them as well. I celebrate most of the major holidays, including Shabbat which we have incorporated in our lives (at least 75% of the Fridays). Other than that, we don’t have a strong sense of religion. I’m comfortable with the amount of religion we have in our life though.

So frequently in my maternal life, though, I’m up against challenges that I feel ill suited for. When your six year old tells you that they don’t believe in G-d, where do you go from there? I always lean towards a more truthful, honest answer but I also want to encourage him in the direction of Judaism.

I tried to explain that none of us truly KNOW if there is a G-d but that I like to believe that there is one. It makes me feel better. And since I try to follow the rituals my family has set up for me, I’m going to continue to practice Judaism and believe in G-d. Unfortunately that means that I will be without COFFEE and food from sundown Friday until sundown-ish Saturday. I can’t help but think that Drew has become so inquisitive and interested, I owe it to him more than ever to observe these customs (as uncomfortable and unhappy as they may make me). I just hope that he takes these lessons and perpetuates them someday with the family he creates…out of respect for the family members before us that have done the same. 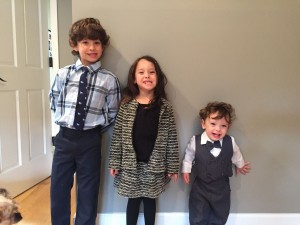