The baby is slipping away. Every day there is a little less baby in the baby than the day before. And each day there’s a little more crazy kid in it’s place. 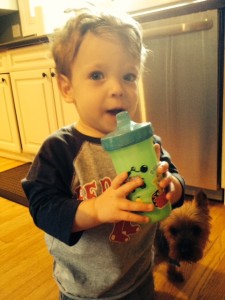 I shouldn’t complain because I was able to get more baby out of him than the other two. His delayed walking skills kept him in that baby zone longer. It seems like the minute he started walking, he became a toddler. All of a sudden he’s talking more, he has opinions, he’s running around with his fellow crazy siblings, etc.

Because he was delayed in walking, I’m so grateful to see him join his peers/siblings. I’m loving taking him to gymnastics and seeing him get right in there with the other kids. I’m so proud when he walks into the health club and says hi/blows kisses to the receptionist. I, without a doubt, want him to be at this really fun toddler stage.

Before I put his brother and sister to sleep, I go into his room and rock him to sleep. He lays his head on my chest and he sucks his fingers. I’m finding myself staying in there just a little longer. I’m holding him just a little tighter.

I want him to do all that (maybe not the fighting to go to bed part) and become that but I’d be lying if I didn’t say that it saddens me too. As I am at the end of the babyhood run, I’m holding on with the skin of my teeth…but what is new about that for me?!?!