You know how the first bite of something delicious is so good and you tell yourself that you are going to try to savor each and every bite. Then sometime right before the last bite, you realize that you got caught up in eating it and didn’t truly pay attention to each and every bite and now all you have is that one last bite. Maybe none of you actually get that and this is another example of how I have a sick obsession with food. But in terms of “mommyhood,” that’s how I’ve been feeling about my children.

Drew came first and we tried to celebrate each milestone. I tried to enjoy every sweet thing he did (which in some years probably wasn’t that hard because they were few and far between – joke, totally a joke). Somehow the pace at which life was set picked up after Gabby came into the picture. I can barely remember her as a baby anymore. I didn’t soak it all in as best I should.

Then “Tres” (as I affectionately referred to him in utero) or Noah came around. For awhile I couldn’t see out to enjoy anything. Recently, however, I realized that it’s not going to be like this forever. Since he started walking (YIPPPPPEEEEE!!!) I realize that my days of holding a baby on my hip are numbered. There were so many times in my six years of motherhood that I yearned for a time where I didn’t have another human being attached to me. And now that I’m staring down the barrel of that proverbial gun, I’m holding on extra tight.

When Drew was born, I cringed having to pass him off to anyone. I had a hard time transitioning to the separation on the outside. I became anxious, like most first time moms, for him to be able to happily bounce in something so I could have a half way decent shower but I always wanted to hold him. When Gabby came, I had to resign to accepting anyone hold her because I was divided. By the time Noah came, I pretty much let the gas station attendee hold him because I was inundated with demands and cries that usually outweighed snuggling with the baby.

After many mixed feelings with Noah’s lack of walking, I settled on extreme frustration. I blamed myself for not engaging with him in an age appropriate way. I was sad that he needed something from me that I didn’t give him. Then one day when all the kids were practically murdering each other for my attention, I realized that I have been extremely successfully “dooped” by him. He found a way to win over the attention he needed, his nonstop clingyness and need to be on my hip. I now resign to the fact that Noah didn’t walk until 19 months because the little madman was manipulating me!!!

So now I’m embracing it. I’m holding him whenever he wants and I’m loving it. At this rate, he may stay attached to me until college and I’m ok with that 🙂 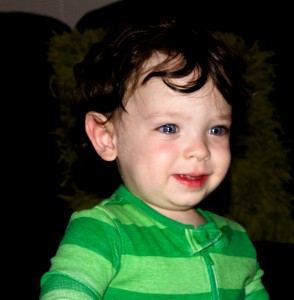 Anxiety In a Different Shape » »