We are going on the forth consecutive week with Adam traveling for work. The first two weeks I really put my best foot forward. The second week my parents were out of town too so I had to really give it everything I had if we were going to survive. By the time week number three rolled around, I was starting to get grumpy. And now that it’s the forth week, I’m downright mad. 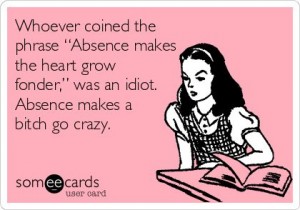 I don’t exactly know who I’m mad at. It’s not my hardworking husband, although I’m sure he’s suffering the brunt of it. It’s not my crazy kids, although I’m sure they can tell I’m beyond frustrated. I’m mad that I somehow became a single parent who has to do almost everything by herself. I’m mad that this change in our lives came at a significant cost without a significant gain.

Adam’s entire department was laid off and they are building the department in California. There was one, ONE!!!!, survivor – Adam!!! We are in a position that we are so grateful that he is still gainfully employed and he is trying so hard not to rock the boat. It’s one thing when life has always existed of your spouse traveling. It’s another thing when your spouse takes a promotion that includes travel. It’s an enormous pain in the ass when your husband is doing the exact same thing, making the exact same money, with the looming threat of job loss and completely and totally absentee!

Drew was completely out of control and emotional last night. When we finally got him (and us) seeing straight, he started to cry about how he didn’t want his dad to leave again. Suddenly I remembered (Mother of the Year right here) that this situation is effecting more than just me (or the person putting in all the hours) but our crazy kids too. They are suffering from living with a single parent who is mad at the world.

We are so stuck in this conundrum, I don’t even know how to see out. I’m currently giving my kids everything I have to just survive, let alone make up for the giant deficit we are all suffering. I’m so blinded by the struggle I am going through to keep this machine running, that I neglected to coddle them through this life change.

With no end in sight, Adam is returning home LATE Friday night. Our two/three days with Dad is no longer tiding anyone over. I’m finding it very hard to keep morale up, mostly mine. At some point I suppose that this will just become standard living, but that almost scares me more.