I want to be wanted

Lately it’s been incredibly obvious that my baby doesn’t prefer me. Sure, he’ll take me. He most absolutely doesn’t want to be put down from the hours of 4-6 and he’ll tolerate my grasp. But when it comes to wanting someone, he’ll take just about anyone over me!!!

This kid is the first one I’ve pretty much been the majority caretaker of. The other two were in daycare early on. Adam contributed with night time awakenings with the others. This one, however, it has been all me.

This baby will practically jump out of my arms at the prospect of anyone with a heart beat approaching. He screams at the mere suggestion of me taking him from any of his favorite handlers. Yet anytime I’m overwhelmed, harassed and alone…he only wants me to tote him around!!

All I’m asking for is a little yearning for his mommy when he bumps his head. A little hesitation when taken from mom’s arms wouldn’t hurt either. Is that really too much to ask for?!?! 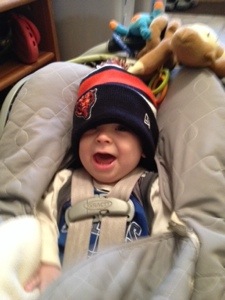 One thought on “I want to be wanted”