Crazy People on the Loose!

Not sure if you got the memo, but 4-1/2 and 2-1/2 year olds are big kids. They can constantly “I do myself” or “I walk myself.” In all do fairness, Drew doesn’t talk like that AND he is getting a little large for me to pick him up, let alone squeeze his long legs into the front of a shopping cart. But just because they no longer have the desire to ride in things such a strollers or shopping carts, does not mean that they have the maturity to handle that privilege.

Anytime I am shopping with a child who is on the loose, I spend half (probably less) the time actually looking around the store and half (probably more) freaking out where my child is. It could be that they are literally right next to me and I’m spanning too far. Or it could be that something caught their eye and they are half way to Tijuana. Anyway you look at it, it’s very stressful.

The other day while out, there was a very suspicious looking guy who seemed to be keeping an uncomfortably close eye on us. Most of the time I don’t even notice characters of that nature because I’m so overwhelmed with my two tasks – shopping and keeping surveillance on the lunatic that’s on the loose (and I’m not talking about the strange man we encountered). This time he was giving me the heeby jeebies enough to notice. We left, everything was fine. 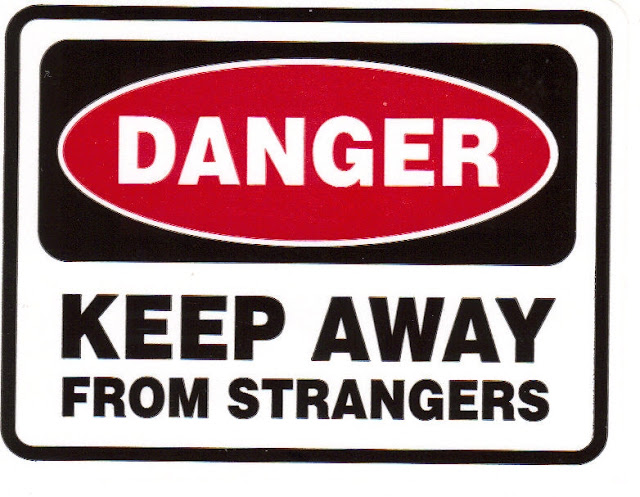 The thing is that Drew is getting to the age where he needs to be educated on things like strangers, emergencies, etc. I feel ill equipped (much like with many things in parenthood) to properly convey the importance of subjects like these without scaring him to death. I spent the car ride home telling him that it’s not good to talk to people we don’t know. That there are bad people out there. The story continued but it was so hard to tell what he was accurately absorbing.

You turn on the news and every other story is more tragic than the next. Everyone knows horrible stories that have happened to good people. Coming from a long line of neurotic mothers, it’s hard to know what is an appropriate amount of awareness and how much is completely crazy. How do you ultimately keep your children safe?

I’ve decided at the present moment, my children are so unruly that anyone who would be crazy enough to take them would probably return them. So I guess I’m safe for the time being…or not?

Independent, Crazy Kid in the Making » »