I have one blissful retreat during the day. It has taken awhile for me to get to the place where I can have this break. But everyday I enjoy it so much. It sustains me. 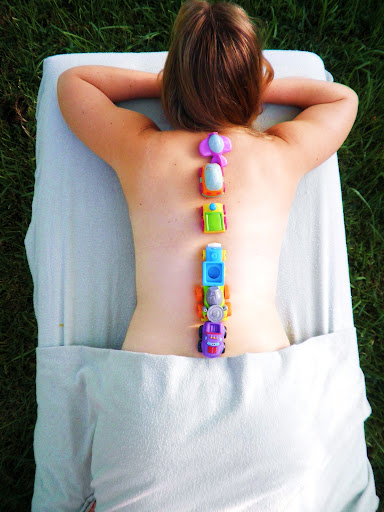 Our day consists of a rather hectic morning, dash to school, gym, dash back to school, crazy lunchtime and then free play until nap and quiet time. Next week this will change for the myriad of classes that start. Anyway, shortly after Gabby is deep in slumber and Drew is planted somewhere with the iPad, Mommy gets to take a long, hot shower. It is my sanity in an otherwise insane day.

It may not sound like I have anything to complain about, after all I get a break from the kids to work out for an hour. But when you are almost six months pregnant and everything hurts regardless of being sore from yesterday’s workout, that is no retreat. This fifteen minute shower of quiet, self reflecting and no children is shear bliss. Part of what I love so much about it is probably because it has taken me four years to be able to earn this little relaxing time.

The first year of having a baby (especially with nursing) it is very hard to get in a five second shower, let alone a silent fifteen minute one. The second year is when that crazy rugrat becomes mobile. For Drew, he had to be confined to a pack and play while showering. Needless to explain to any parent, he was less than enthused to be there and never let me relax. For Gabby, she could amuse herself for a solid ten minutes in the Exersaucer (long enough for a quick shower and dressing). Or you may think a show could sustain your child long enough for you to take a bare bones shower. Every time I made that mistake, some household something was destroyed, children were crying from each other or I was eventually invaded in the shower.

Now, however, Drew has the “attention span” to space out to the iPad at a time where Gabby is safely snoozing. So I am given my mid-day retreat that I value so much. But that brings me to the underlying issue, my days of enjoying this retreat are numbered. Soon “Tres” will be here and I will be back to hearing a baby howl while I try the two second cleanse. And now I have the fear of “Tres” disturbing Gabby which means that Gabby will not be well-rested. Which probably means that she will annoy her older brother (who may still stay in his space out iPad time) to get his attention and play, ultimately resulting in Drew going wild too. Oh lordy…what have I done?

I remind you of the blog I wrote, The Calm Before the Storm, where I committed myself to not think of the impending stress of having three kids now. I cannot, however, appreciate how good it is to have my shower without acknowledging how fleeting this opportunity will be. And in doing that, I am reminding myself of how different and challenging my life will become in a few months. So for now I will press pause and just relish in the fact that on this very day in September of 2012, I was blessed enough to have my little retreat. And some time in the not too distant, assuming at least two more years is not too distant, future I will be able to experience this again. What’s really two years in the scheme of things?????

« « I will NOT negotiate with terrorists!!!