Day 4 of the Challenge

As mentioned earlier in the week, I’m in the midst of the eight day Passover challenge. Keeping Passover has always been a challenge but now trying to manage Gabby’s allergies and keep Passover is REALLY difficult.

Last night I made a meal that I was rather proud of. 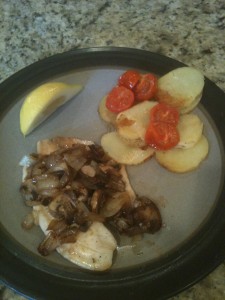 I seasoned the tilapia with salt and pepper, smothered it in fresh lemon juice then sauteed it in olive oil and garlic. I also sauteed some onions and mushrooms, separately, in garlic and olive oil. I served the garnish on top. 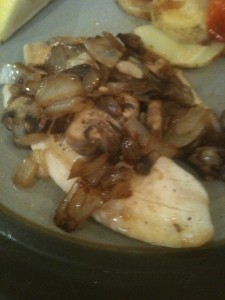 I boiled some golden potatoes. When they were soft, I thinly sliced them, brushed olive oil onto both sides, and drizzled kosher salt. I also included some cherry tomatoes, cut in halfs, dressed the same, and baked them together at 425 for 25 minutes. 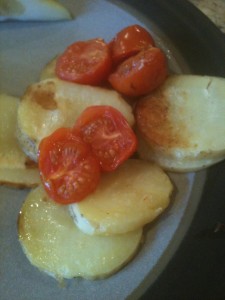 The good news is that Adam and I loved it! We ended up eating far more of it than anticipated since both kids refused to eat it. Gabby liked the potatoes, Drew didn’t like anything. Wah wah!