Can you fail kindergarten?

Who knew when we happily celebrated our new pregnancy that we didn’t make our kids at the right time?!?! My two oldest children were born in June, Gabby at the tail end. At the time I thought it would be nice to celebrate in the warm months. It was fabulous having new babies that you could instantly take for walks outside. What I never really factored in until school started was the deadline for grade levels.

Having a boy first, I resigned to the fact that some of the physical milestones were reached early on (he started rolling over at 10 weeks) and some of the fine motor, educational milestones were a little further behind. Kindergarten was an absolute joke, two and a half hours long – shorter than preschool. Starting out in first grade, the teacher warned us to not talk to her about any concerns until November. The chick knew what she was talking about. The first few months were full of exhausted temper tantrums and frustration over school. Once November rolled around, Drew understood the demands of school and was bit by the reading bug. Success!

Nobody ever mentioned the idea of holding back my children. Until Drew started public school (versus preschool) I never knew anyone who held back their kid. Once he started, he had friends that were almost an entire year older. Eventually Drew has caught up (maybe not completely on the maturity front but what 2nd grade boy is mature?!?). He’s at least AS SMART as his peers, if not smarter if you ask his devoted mommy. So when my girl rolled around, I thought this would be a cake walk. If I survived having a young boy, I won’t have any problems with my “mature” girl…NOT!!!!!!!!!! 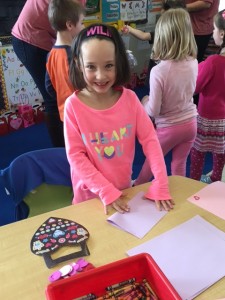 Recently in a brief conversation with her teacher, I asked if I should have held Gabby back. She gave the stock answer that they prefer kids to stay in the grade they are the appropriate age for. I asked if she thought it would be helpful for Gabby to repeat kindergarten (GASP!). She provided a similar stock answer that they prefer to provide resources than do anything like that. Ok, so maybe in third grade (isn’t that generally when everyone catches up??) she’ll be on par with her peers????

I’m so torn because I really think kindergarten has turned into Drew’s version (only a mere two years ago) of first grade. I feel bad that Gabby is forced to behave and learn at a speed she appears to be not ready for. I’m grateful we are in a district that has so many services and resources to help her. I can’t help but wonder if I should have held her back…would an extra year have been the answer here? I guess we’ll never know now 🙁