My littlest child has been my easiest child to co-exist with. I always thought he was a gift from the heavens declaring that it’s impossible for someone to have THREE difficult children. I thanked my lucky stars. And frankly I have felt that there’s no room for my brain to focus on anymore shenanigans because the others occupy all of it, so I might even not notice if he was causing trouble.

You’ll notice that that was all in PAST tense. Terrible threes, we meet again. It started with a few outfit snafus. He wanted to wear inappropriate clothes on inappropriate days. And I’m not talking about in the same way Drew only would wear his hockey jersey for the entire 3rd year of his life, or the way Gabby walks around looking like a homeless person. I’m talking about in a weather appropriate, you can’t wear a bathing suit to school, sorta way. I have completely given up on the fact that children should wear winter coats and shoes when traveling to and from home or a desired destination, but I cannot bend on buckling a child into a car seat. All of these incidents have incited the equivalent of riots in this house. 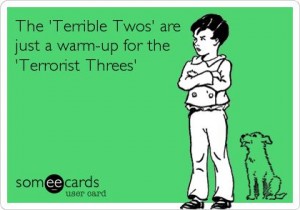 The major problem is that I am no longer fighting just the out of control three year old. I am fighting the parties that represent the out of control three year old. After battling an extreme temper tantrum regarding a specific shirt, Noah came down in his desired outfit. His brother and sister were nice enough to assist in the costume change. After holding Noah down and using all my body weight to buckle him, his brother unbuckled him so he didn’t have to listen to him cry anymore. The terrible threes just got expanded to a terrible household problem.

Ok…I muster up my game face, plan a strategy and go! Anyone who aids and abets in a temper tantrum is just as guilty as the person who is having a temper tantrum, right? Well, not exactly. It’s hard to properly punish a temper tantrum when it really is a phase that every child (despite the fact that I thought I might be able to will him past it the way some kids pass crawling) goes through. The kid wanted to play at home longer and not take his brother and sister to school, hence the temper tantrum regarding buckling. So next time I’ll give him more warnings about our impending departure and he’ll use some other excuse to have his morning tantrum. The big kids, however, legitimately under-minded me by unbuckling him. So should I add this to the long list of things I need to work on with those two monsters? Anyone who encourages a temper tantrum will have reduced screen time. I think I’ve already taken away screen time for life based on other circumstances. Sheesh!

I refuse to wish away this year of my last baby’s life but I have no patience for this tantruming bit. Three year old Noah, can you please bring two year old Noah back to play?

I have recently started dying my hair because I am getting more and more gray hairs by the day. It’s really no wonder that’s happening…