I am never going to be the preferred parent, I’m working on coming to terms with it. I think I’ve made it to the top five, that’s not too bad right?!?

From the moment I started dropping Drew off at daycare as an infant, he scooted off. I used to say that I’d like him to feel some sadness in saying goodbye to me. Everyone assured me that that would be worse. I’m not so sure. The one and only time I can remember Drew choosing me over anyone was when it was 90 degrees, I was 38 weeks pregnant, and he wanted me to carry him the mile to our car.  Gee thanks.

As Noah’s primary caregiver, he seemed to generally prefer me. For nothing more than I was who he was used to. Recently he’s started saying I want Dada when I come to get him. He will only let Grandma hold his hand in the parking lot. I’m starting to get pretty peeved about it.

With Mother’s Day on the horizon, I’d like one of these little rugrats to stop and think about me every once in awhile. I don’t expect that they are going to think about my feelings, my wishes or what makes me happy. But is it too much to want me when they get hurt, choose me to hold onto or miss me from time to time?!?!

Yesterday Drew brought home his Mother’s Day card for me from school. I found it while cleaning out his bag like I do everyday. When he came into the kitchen I thanked him so much for my beautiful card. Instead of accepting the compliment, he got mad at me. That card was for Mother’s Day and I ruined it by reading it before Mother’s Day. Excuse me???? Isn’t that card about making me happy and that’s exactly what it did. I can’t win.

I’m not being completely fair, Gabby does tend to choose me. She chooses me for things like…wiping her butt, buckling her in or being the only one who is “allowed” to help wash her hands while I have a million things going on simultaneously. Maybe I need to focus on how lucky I am that she chooses me for those tasks.

The truth is that being a mother comes with a lot of guts and little glory. Nobody is going to bring me a Pulitzer Peace Prize for wrangling peace between two warring nations – i.e. two kids. The times that someone is going to want me is probably going to be at 3 am when I’d rather be sleeping than trying to get a child to sleep. And I can almost promise that Adam will always be more fun and more cool in their eyes. I guess that just comes with the territory.

But as much as I’m exhausted, overwhelmed, stressed and frustrated every day of my life. I’m also thrilled to be their mom, for better or worse. I’ll just have to count my wins where I get them. Yes, maybe I read the card on the wrong day but it was a pretty cool card. And I’m really grateful that I get to be Drew’s mommy (Gabby and Noah’s too!). 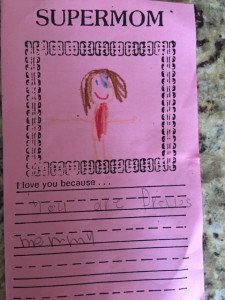