My Nemesis – the iPad

Do I need to explain the excitement Drew went through when school GAVE him an iPad? It’s certainly not because he hasn’t been exposed to the iPad. He pretty much already has his own at home. And it’s also not because he has a full access pass to do whatever he wants on the iPad (the school sets its restrictions on what you can/can’t download). He just assumed (and you know what they say when you ASSUME) that he could spend the remainder of his life with his face in that stinking device.

Since he started full day first grade, he’s been a little more of a pill than normal. The teacher prepared us that kids often have a hard time adjusting to focusing all day in one location. She also mentioned that it sometimes takes until November for them to really get into a groove. Therefore, I have been drastically limiting play dates to Fridays after he works all week to “earn” his play date. This past week the two kids spent the first half of their play date completely non-verbal with their noses peering over that school provided electronic device.

Drew’s entire existence has consisted of a back and forth battle over media. He wants 24/7 exposure to it, and I’d like about 30 minutes. Unfortunately I have learned the hard way that the only real way he can unwind seems to be in front of some sort of screen and that denying him the chance to unwind is detrimental for the both of us. That doesn’t change my distaste for the constant need for a screen, largest of which the iPad.

There came a time around kindergarten that I learned that he must have some exposure to screens of sort to be competitive in the scholastic world. The extent of it, though, is a different story. That stinking machine continues to be my nemesis and best friend all in one.

The largest frustration is that most children in this community are exposed to iPads and screens of all sort. I appreciate that we live in an affluent community that can provide many things for our students. Having personal iPads that come home with the children seems completely excessive to me. I feel the same way about visiting the library and finding an iPad there too!

I agree that our children must learn and be comfortable on technology but there must be limits. I believe that the limit should be set at school, and maintained at home. Have the children work on a lesson on the iPad at school and then check their iPad in. Have the children sign up for a workshop at the library to teach them safe usage of the iPad. This unlimited full on access of iPads and screens is unnecessary for a six year old and makes my job even harder!!! 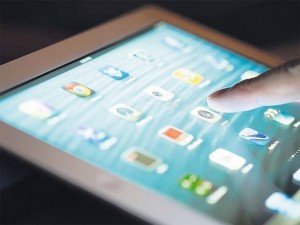