I’m exhausted. And not in that stayed up too late watching trashy tv sorta way, although true. I’m exhausted from dealing with aggressive toddlers. I’m tired of trying to teach someone that barely understands English to be appropriate. I need a MAJOR nap from this chapter.

Drew was an insanely aggressive toddler. Maybe it was partially because he was my first and I didn’t understand the whole “hands on your own body” concept. It seemed like daily I would get notes home, phone calls, being pulled aside by teachers, etc. about how he was pushing some other kid around. I learned over time that he was trying to engage with his peers just needed to learn HOW to.

When Gabby started up with some of those behaviors, I wasn’t surprised. She dove more into some brutal behaviors of biting and scratching (her favorite). I was frustrated that my sweet little girl was behaving like an uncivilized boy (haha) but attributed it to growing up with an older brother.

The other day when I picked Noah up from the gym daycare, they explained to me that he’s been pushing. He’s got a mean shoulder shove that he’s been targeting specific kids each day. I’m guessing those just enough younger than him that he can actually push around without receiving a backhand.

It is absolutely no surprise that he is developing aggressive tendencies. I’ve actually been praying for these tendencies to start so that he can kick his older sister’s butt because I’m tired of her pushing him around. And perhaps I should have been a little more careful in what I was praying for.

I do not feel like going through those days of entering the kids club holding my breath to hear what sort of trouble an offspring of mine has created. I am not up for a child of mine pushing around fellow children in classes that I take with him. I do not feel like starting all over again with time outs and positive reinforcements for someone that can barely understand what they did wrong.

I’ve been walking around the last two days saying “Nnnnnice puppy dog” and petting him. “Nnnnnice friend” and making nice. Does he have a clue what the hell I’m talking about? I’m not sure I even know what the hell I’m talking about. All I know is that if that child gets himself kicked out of the gym kids club there will be hell to pay on a colossal level which may in fact teach him the art of “hands on your own body” at the tender age of 22 months. 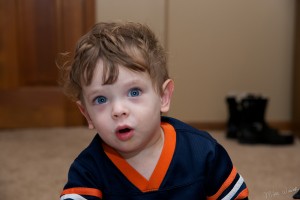