Drew calls the shots in our family. If he doesn’t like a restaurant, we never eat there again. If he wants to play something, there’s no rest until we are all participating. Gabby has had to find other ways to get her voice heard. Recently, she is the “loudest” by attacking (smothering) Noah. It’s the only real way she knows to get me to stop dead in my tracks.

Until recently I thought these efforts to battle for my attention and rule the house were lost on Noah. I have spent months blaming myself for his inability to walk. I am now changing my perspective. He has found his own way to manipulate me. His constant need for “uppie” forces him into my arms in a way it does not for the other two. I spend my life shlepping him to things for the other two, and now that he is so unbelievably late walking I am forced to spend an hour a week working exclusively with the physical therapist and him. He is pulling my strings in maybe the most strategic way he knows! And the whole time I thought he was an innocent bystander!!!! 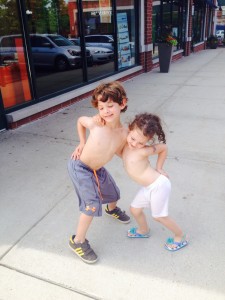 Every week the therapist comes and commends Noah on his minor improvements sounding so optimistic. I have gone through a roller coaster of feelings. At first I was so pleased then disappointed, followed by satisfied and now fed up. If what he needs is more one on one time, I’ll find a way and give it to him. But I am beyond sick and tired of having a four legged biological child! 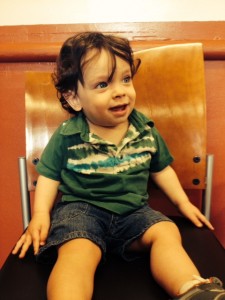 I will avoid Real Urban BBQ for Drew, give Gabby all I’ve got to rescue Noah and spend an hour a day carving out time with just Noah. Is that enough children? Will you grow up productive, well balanced people if I commit myself to that?!?! I certainly can’t be asking too much if you people are demanding all this from me!!!!

« « The Enormity of Play Dates

The results of a fun weekend » »