While Noah was getting his second haircut, he was screaming bloody murder. One of the ladies exclaimed that he must not be my first because I was so calm!!!! You talking to me??? Calm??? Hmmmm 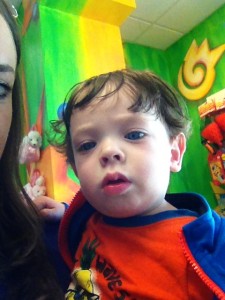 Getting equally hysterical as the baby during his haircut has proven to be a waste of energy. I have learned that chasing the uncooperative child around music in efforts to get him to participate is frustrating to both parties. So I just don’t do it.

Does that make me calm?? Ummm no but it shows that I’ve matured and perhaps learned something from hours, who am I kidding YEARS, of beating my head against the wall! And the truth is that I’m tired. I’m tired of negotiating over nonsense, I’m tired of sprinting after children and I’m tired of disciplining. That being said, there are too many times to count in a given day where I have to do those things because it’s life or death (no Drew please don’t jump into traffic to show me that you DESERVE a play date) or because I need to teach a valuable lesson. So the times where it would be nice if they cooperated but they aren’t, I just throw my hands up in the air. Call that calm, call that lazy, it just is what it is. It’s too bad I didn’t learn some of these things with #1, maybe I would have had more energy now if I had!

The Illusion of Relaxation » »