Star of the Universe

Drew is “Star of the Week” at school. He recently remarked that he wanted this week to never end. Who is this kid kidding, he’s star of the universe in our house. It’s Drew’s world that he sometimes lets us be a part of. And he has the nerve to say he always wants to be star of the week???? Humph! 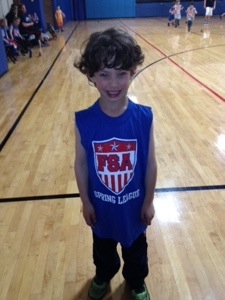 I’m sorry Noah, you may not have the slumber you need because we ALL have to go pick your brother up from school. I’m sorry Gabby, you may not go play at the park because I need to watch Drew at t-ball, at soccer or at basketball. The entire world revolves around Drew and his agenda. If there’s room for ballet, gymnastics or music class, it must fit in when Drew is occupied.

I’m sure this already is plenty of ammunition for their therapy sessions (Gabby and Noah feeling they were never valued in their nuclear family, Drew feeling like the rest of the world never valued him enough because it didn’t all revolve around him, yadda yadda). The truth is though, most families I see are set up the same. The first born’s wants come first and everyone else getting less. Traditionally, the third getting the least. And in some cases, it actually appears that the third actually NEEDS less as a result. Of course I’m sure that won’t happen in my case since I’m 2 for 2 on the needy scale with my older kids.

And what am I supposed to say? Drew, walk home because pickup is during Noah’s nap time? Sure Gabs, let’s hang out at the park and ignore your brother’s game (I’ll just turn a deaf ear to the hours of guilt he’ll bestow on me!). Let’s mess up the natural order of life and see what the one year old wants to do on Saturday, rather than carting him around to the big kids’ events. That’s clearly not gonna work!

So here we are, really where we always are – Drew’s the star of the show and we get to sit front row. Maybe Gabby and Noah deserve to star but that’s just not the dynamic we’ve got going on. For better or worse…it is, what it is. Maybe I should start making payments to the therapist now.