I failed the test!

There was a quiz on Facebook asking “How many kids SHOULD you have?” Too bad I didn’t take the test before procreating…

I guess I should be happy it didn’t tell me to go sterilize myself and that it would be to the detriment of a child to be born into my life. The results weren’t three kids in five years, no surprise there. 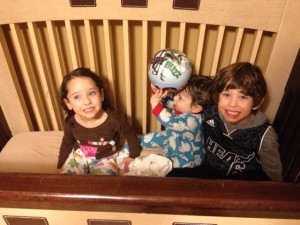 For a long time I’ve battled the feelings that having children is selfishly motivated. Clearly my eggs weren’t begging to become babies. Probably if I were self-less I would go to the worst of orphanages in the world and give existing babies a home full of love. Rather, we add to the world’s large population by creating little people with our genetic makeup (like that was so good to begin with?!?).

It’s the way of the world, or at least the conservative mainstream world, to get married and have babies. So I did that. I brought home my beautiful baby boy. I’m sure I could debate up and down how there are benefits of certain age differences. I, however, got pregnant with baby number two before baby number one was done being a baby. He was booted from the crib and sent into adolescence before he probably should be. I spent time begging him to walk without being carried, hours on the potty to get someone out of diapers and booted him out of his car seat to pass it on. It’s no wonder he’s been so defiant, I’ve pushed him along to usher in the next.

The same story with number two. The difference here is that my efforts were even more divided so the story gets much more bleak. There’s no denying that my heart would not, I repeat could not, have been complete without my third. He was the missing piece. He, unlike the others, gets to actually stay the baby instead of being rushed into a more mature station in life. But he has been denied the opportunity to have a mother (parents) that can dedicate to him in a way he deserves. 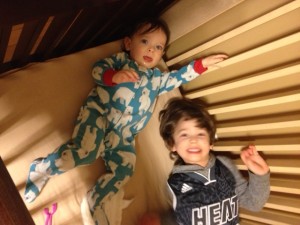 Having my third, having the baby that my test told me was a poor choice, in so many ways has seemed like the breaking point. I literally have no more brain power, muscle power or stamina for another thing. I have nothing left. And in having him I feel that I had to pay a price, or rather he had to pay my price. Sure, he gets siblings. Sure, someday they will be friends (G-d willing) since they are so close in age. Did I create this situation, the situation that my Facebook test tells me was the wrong decision, for the benefit of my baby? For my family? For my other two children? Or for my selfish desire to have three kids? And does it matter?

One thought on “I failed the test!”