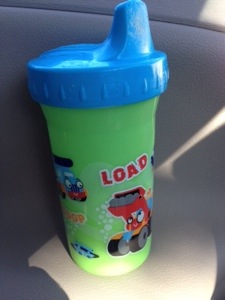 It’s certainly not an umbilical cord providing nutrients, nor is it a boob supplying mother’s milk and it’s not a bottle giving scientifically produced formula. This contraption is a toddler cup, also known as a sippy cup. My baby is graduating.

The other day I put my gummy smiling baby down for a nap. After a solid couple hours of slumber, I found him with a tooth on top. I couldn’t help choking up. His two little teeth on the bottom didn’t really change his gummy smile but this new guy was going to be a game changer.

Despite onlookers surprise with him still being carted around in his infant carrier, I’ve been dragging that seat around. He has a pound and a half left before reaching the expiration of that seat. Partly I am reluctant to switch out of laziness, partly because I have mastered handling him in this and am dreading progressing and partly because I am not ready for him to sit in a toddler car seat.

I have blogged of the mixed emotions with my baby leaving the baby stage. I am more than happy to be done cleaning bottles. Giving up nursing was more freeing than expected. I am thrilled to retire my body from its baby making duties. Facing that I will no longer bring up a new life, like I have for the last six years, is hard. I’m so excited of what’s to come but I can’t help but feel emotionally nostalgic for what I’m leaving behind.

Goodbye bottles, hello sippies. I certainly have gotten my mileage out of those Born Free bottles. It’s been a good ride.