I know I should have been enjoying every minute of infancy, especially with Noah since he’s my last. It was near impossible. Between the sleep deprivation and overwhelming feeling of having a new baby, I found myself wishing away the months until they slept better, ate better or just became more of a person.

Then six months hit. With each and every baby, I suddenly understood how it felt to fall so madly in love with this little pooper in such an unbelievable way. It’s not that I didn’t feel it in that zero to six months but I felt it from head to toe in a sixth grade anxious excited crush sort of way. And once the months started stacking up after, I found myself trying to put the brakes on this whole quickly aging process.

Perhaps I felt this less with my first born, Drew, because it was all new. But certainly with my third, Noah, I find myself cringing as we are nearing the 20th day of the month as that marks another month older. Now that he sleeps through the night, is awake more of the day than he is not and has a happy personality, I want him to stay my baby longer.

I’m not going to lie, I despise those early steps and desire to run after everything a toddler should not have. I remember so clearly the exhaustion of chasing after a toddler and am not looking forward to doing that. Plus, our life is so chaotic with the myriad of places Noah must be carted to. I can only imagine how challenging Drew’s soccer games and Gabby’s gymnastics classes will be while chasing after Noah.

More importantly, though, I’m not ready to not have a baby anymore. Don’t get me wrong, I will happily give up formula and diapers. But I still want onesies and snuggles. I still want him to lay his head on my chest, light up when he sees me and let me devour his cheeks. And as we approach the double digit month marker, I know these days are fleeting. I just want to hold on to them a little longer.

I’m so excited to see who this little man will become, what he will be into and how he’ll fit in with the other crazy people he lives with. I just am not ready for it as fast as it seems to be coming. 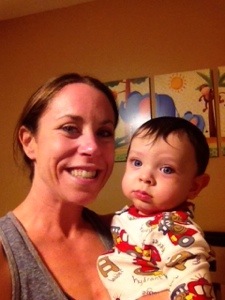