I have frequently thought Gabby got the best part of me. For Drew, I was so wrapped up in the change of being a mom and what that life brought me that I don’t think I enjoyed every second of it the way I should have. With Gabby, I knew what it was like having a baby and I enjoyed her in a way I was unable to with Drew. And now with Noah, I’m so overwhelmed in this life of three children that he’s sometimes just swept up in it without the attention he deserves.

Noah is currently at my most favorite stage of baby-hood. He sits up but does not move. Unless you count his log rolling abilities to get across the room. He’s not trying to stick things in electrical outlets, he’s not running around on unsteady legs and he’s not crawling at champion speeds. He’s sitting playing with toys, talking a lot of gibberish and finally getting the whole concept of baby food.

I’ve been trying to think back on what this fun baby stage was like with my other children. Drew was on the move very early on so I remember this stage being very brief. I’m having an especially hard time remembering Gabby at this point. I even find it hard to think about her baby face. It makes me really sad that as the time goes by this will be harder and harder to remember. 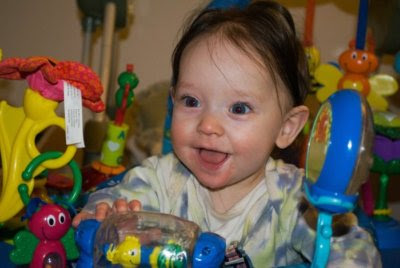 So recently I have been snuggling Noah a little longer. I have been giving extra kisses to those chubby cheeks. I’m trying harder to marinate in this phase because before I know it, it will be a distant memory at best. It made me think that maybe he doesn’t always get the short end of the stick. Sure, he’s going to wear hand-me-downs until the end of time. He will absolutely be carted around to his siblings’ many activities. I will also be more reluctant to sign him up for the same activities based on the overloaded schedule of the other two.

As the third, my final baby, he will also always stay my baby. I will hang on to each of his phases like a lifeline to life when my children were babies. I will be happy carting him around on my hip WAY past the point I was encouraging my other two to use their own legs because there was another baby who needed that spot. So maybe in some ways Noah will get the best of me too. In some ways maybe they all have gotten a best part of me, just in different ways. I sure hope so.