Sibling rivalry in its finest!

Seeing as I have never had a sibling, the relationship is beyond me. I have certainly been exposed to plenty of friends and family who have had siblings. What I have learned is that sibling rivalry is alive and well at all ages. I have spent times trying really hard to not play my children against each other, but sometimes it’s near impossible. 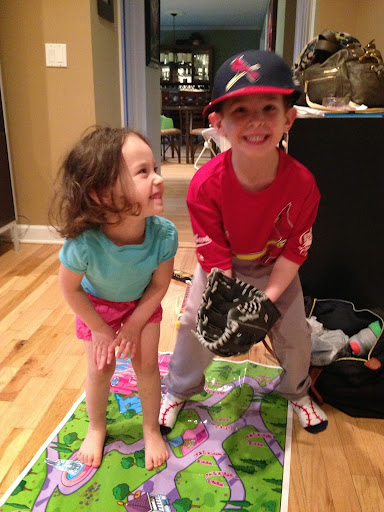 The other day I was bullied by a gang. That gang happened to be human beings that would not exist if it weren’t for me. It started by Drew saying something nasty, me appropriately disciplining and followed up with both kids screaming about how they hated me while they woke Noah up and he joined in on the screams. Help…

My sweet (although terribly two these days) Gabby would not even KNOW these words (I’m not quite sure how Drew does) if it weren’t for Drew. She just follows him blindly and sometimes that takes us down a road of mass destruction (basketball hoop, footballs and jerseys were taken away in this meltdown). But sometimes I’m able to play this same story to my benefit. When Gabby behaves or listens well, complimenting her (also known as positive reinforcements) can cause Drew to change directions.

The problem is that I can already see years from now when things like “goodie two shoes,” “your favorite,” etc are thrown into these conversations. I’m not exactly trying to play them against each other, I’m just trying to survive in a world where I’m so frequently tag teamed with bad behavior. So when I said “whoever has the best behavior can have the basketball hoop in their room,” it was really to change the momentum and not have them work against each other.

Nothing makes me happier when they are productively playing together. I love that Gabby has a big brother to help her put her coat on, show her how great independence feels and be a positive influence on her. It’s when the big brother’s behavior, which feels like more often than I’d like, takes on a negative impact that I feel like I have absolutely no control (hence the fact that I pretty much took away his entire room in efforts to combat them beating me up) that I have to pull out the big dogs.

I hope these “forever friends,” as I like to call it, learn to appreciate what a truly special relationship I believe the sibling one to be. But in the meantime, if I need to create some rivalry in order to survive, that’s the way it’s gotta be. Just one more thing for them to talk about in therapy when they get older…

« « She Works Hard…not for the money