I was one of the first of my friends to have a baby. And so many of the things that are now so second nature to me, were so foreign and I didn’t have many close friends to look to that had gone through it first. So when Drew was first born, I shuttered at the thought of him having a bris. A bris, formally is brit milah, is a “covenant circumcision.” Most Jewish people have a bris eight days after their son is born. 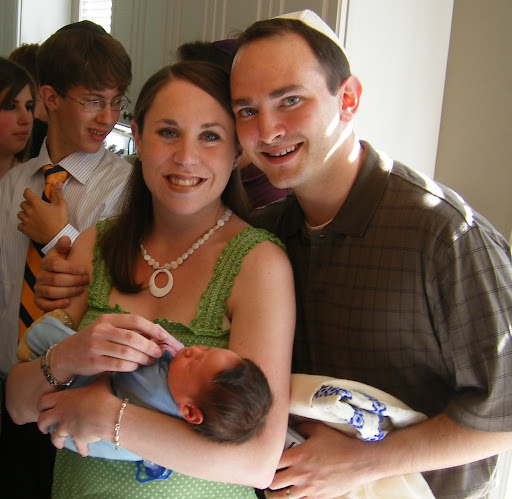 We all lived to tell the tale and it was actually a nice day. The procedure went well and he had a nice recovery. The wine they let him gnaw on during the procedure allowed him to have the only good night sleep in the first three months of his life. And mostly it was special sharing my baby with all of our friends and family while completed a tradition that all my male family members went through too.

Over the weekend we went to our friends’ son’s bris. I looked at our friends, the parents of this newborn, and I saw the pride, concern, and love that they have for this baby. How special it is for them to share it with all the people that matter most to them during these emotionally charged first few days. I looked at the grandparents (some of which were inter-faith) that had this loving, supportive attitude. The parents shared the origin of the child’s name, which had been passed on from revered relatives that are no longer with us.

The whole experience made me feel so lucky to be a part of a tradition so rich in love and support. It was almost as if it were a religious experience 🙂 I joke about that because most of my faith comes to me in something different than most. I support these rituals (crazy as they may be) because the people that matter most to me believe in them. I support these beliefs because my ancestors died for their feelings for them. I support these ceremonies because they are rich in family and love. And unlike my feelings when Drew was born, I will eagerly embrace the opportunity to give my son (if that’s what I end up having) a bris for all that it has meant and continues to mean to my ancestors and family members.

What a difference a year makes! (The summer edition) » »