Show ‘Em What We’re Made Of

I come from a place where we hire. We hire someone to fix things, we hire someone to maintain things and we hire people so we don’t have to think or differentiate between the two. When Adam and I bought our first house it was new construction, so we felt at ease that major things would be in good shape. Plus, the convenience of having an association that takes care of a lot of different things.

Then we decided to enter the world of a fixer upper. Before purchasing the house we brought a variety of people over to survey the pile of bricks. Most people with any sort of know-how said that it was going to require a lot of work…frankly people with no know-how could have assessed the same thing. What I think those who knew something about something were saying is that owning a home in general is a lot of work. Owning a home that hasn’t been cared for in a long time, requires even more work.

As mentioned last week, we are trying to tackle the outside projects. And one of the large thorns in our side was an overgrown, hideous tree at the entrance of our house. So as landscapers have come through estimating the extent of our projects, we learned early on that a lot of these projects we were going to have to learn to do them ourselves. This concept that was foreign to us in a way that generations (on both sides) have convinced us that if you can’t hire someone to do it, it doesn’t get done.

So this past weekend Adam, with the amazing help of two special friends, kicked that tree’s butt. And although it is a small project in the scheme of things and there are still numerous projects ahead, I’m ecstatic at the results. It has restored my confidence in our yard work abilities. It has already improved the entrance of our house. And it almost excited me at the prospects of what we can do (with the help of friends) in regards to our yard. 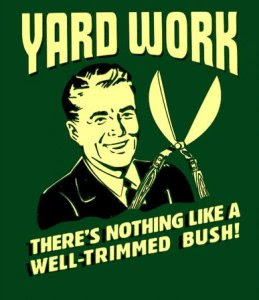 So if we were taking tally on the outside, I’d say one point for the humans and zero for the weed beasts that have taken over our yard.

« « Does being single longer make you a better married person?