Since my first born came into the world after 32 hours of labor, he has been a difficult child. Ironic as it may seem for a child that didn’t want to leave the womb, he has always been resistant. I suggest a trip to the zoo, and he screams that he doesn’t like the zoo. He has spent the better part of 7+ years giving me gray hair! I have spent a lot of time, worry and energy working on my relationship with him and figuring out a way to coexist. 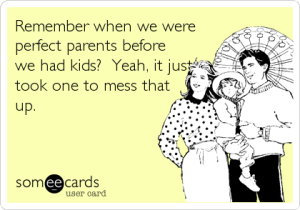 Second grade was a big year for maturity and growth. We had been seeing a therapist for years, and she “graduated” him. His issues becoming further and farther between. We had found an ability to reason with him in a way that we never could before. He understood his responsibilities in our family. Or maybe we learned how to communicate with him in a way that resonated with him. Whatever it was, life with Drew had improved.

At the beginning of the school year I was fearful. He was entering a school year without many friends in his class, a new teacher and steeper responsibilities. And with all this worry that follows me around, I never expected the success he has had in a few short months. He has made friends, he has become a leader amongst his peers (including being an elected student council representative) and he has continued to be a more positive family member to live with. Or maybe the Cubs won the World Series and that trickled over to every avenue of his life. Regardless, he has had a fabulous first half of the school year.

Occasionally Drew 1.0, as I often refer to his former self, rears his ugly head. Drew still struggles with sportsmanship and his ability to self regulate in a sports situation. I spent the majority of the road to the World Series in a state of panic at the sheer thought of dealing with Drew after a loss. I’d be lying if I said that I never argue with him about homework or fighting with his sister. But he’s become a big help with his little brother, understands the consequences of his behavior better and knows the expectations we have of him…or values his screen time enough to walk the line. Whatever it is, I’ll take it!

The best part about this new and improved Drew is that I actually get to see how very sweet his heart is! I was so bent out of shape with our issues, coming off of an issue, etc. that I infrequently spent time just enjoying him. He could be my most tender, kind-hearted, loving child and I almost didn’t even realize it. This loving influence has reshaped our entire home.

I’m not going to pretend that it’s always going to be smooth sailing here on out, but I’ll celebrate the wins where I get them. I’m so proud of the growth and maturity he has experienced. I don’t know if this would have happened with time or it took all the efforts we put in. It has not been an easy ride but I’m so grateful for his current station in life. And the least I could do for him is to celebrate his progress on my blog, since I’ve used this same blog as a vehicle to publicly bitch and moan about all the struggles he has thrown my way over the years!