Sports is a language that I don’t speak. Goals with baseball, home runs in basketball, innings, quarters – I don’t understand any of it. When my eldest came out of my body, he came out a sports guru. At the age of 1, he sat through a baseball game eyes wide and in love. Since then, his passion has only grown. 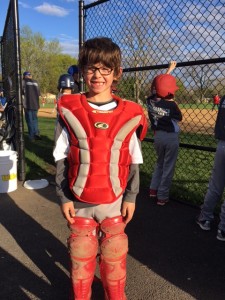 Over the years it has been hard for me to manage this obsession. There’s always a score he must see and there’s always a game that he’s unhappy with the outcome. For someone who is completely unaware of anything having to do with sports, it’s a major adjustment. One therapist suggested that I deny him anything having to do with sports until he can learn to better manage his emotions. Even if I wanted to do that, the men around me would not allow it. He’s a child prodigy when it comes to sports, and the men in our lives seem to love it.

I decided to choose the unrecommended path of trying to teach him to better manage these emotions. Fighting with him to get out of bed after a Super Bowl gone wrong. The NCAA tournament providing countless challenges with upsets throughout the month of March. Each opportunity being a learning experience and extreme challenge in one.

Recently my son has started travel baseball. I was reluctant to have him tryout. I was not sure that he has the maturity to manage a spring/summer of nonstop baseball. A season full of constant testimonies to his sportsmanship or lack thereof. At first I was grateful to get him away from all the screens – telephone scores, games on the television and video games where he can pretend to be LeBron James. Some fresh air and the good ‘ole American pastime could do him well. And that’s what it was for him at first…

The the season started. Umpires were making “bad calls,” pitchers were not pitching within the strike zone, coaches were putting players in bad positions – the list goes on and on. Each game has presented its own challenges which ultimately has ended with poor behavior and bad feelings for all. I used to think good sportsmanship was strictly about weathering winning and losing. I have since learned that it is so much more.

He’s almost eight years old. He’s incredibly young and incredibly immature. We have been given a situation on steroids to manage. It’s not necessarily about him anymore. We know he’s going to have problems, the first month of baseball has taught us this. It’s now about us (my husband and me). It’s about how we are going to teach him and manage him so that his passion doesn’t become something he is unable to enjoy.

I’d be lying if I didn’t say that some of his intensity he inherited from me. I have a Type A personality where I’d prefer (like many) to be the best at everything I do and if I’m not, it’s incredibly hurtful. I understand the motivation behind his actions, I understand the pain he’s experiencing and I understand the pressure he’s putting on himself. What I don’t understand are the actions to follow. But I feel very strongly that it is my responsibility as a parent to help him through this difficult time. I feel that it is important that I teach him that he can be unhappy with the umpires, coaches, other team, etc. but he cannot act out on those feelings. He can be disappointed that he struck out, but he cannot throw his bat. He can be sad that his team lost, but he must give the other team high-fives. Much like riding a bike, learning to read, or even potty training, I am his mother and it is my job to lead him in the direction of success. Wish me luck.