Like a bow plays the violin or better yet a well oiled machine – that’s generally speaking how Adam and I co-parent. That doesn’t mean there aren’t times where we disagree – like signing Drew up for traveling baseball tryouts or adding five minutes to a punishment. But we support each other and don’t waiver in front of our monsters. I think that says a lot about our teamwork.

You can imagine how difficult it was for me when Adam made a job change that called for travels to Milwaukee day in and day out. He would leave so early in the morning and come home just before bedtime. It made for long days with the kids and I missed him so much. Little did I know that that was a cake walk compared to a commute to California. For nearly a year, he spent the majority of the week in California. It made me long for the days of his commutes to Wisconsin.

Last November Adam started a consulting gig that has him working from home most of the time! Talk about a shock to our system. We had gotten used to his absence and now he is home almost all the time!!! A few months have past and we are now in a rhythm.

Without Adam around, I was completely a reactionary parent. I was treading water for survival. It concerned me that my children were growing up with an angry, militaristic mother. The only way we could survive was with a strict regimen and the fun of having kids was missed by trying to make it through the day.

Now that Adam is home, our children are benefiting from a happy mother, a dual parent household and a more pleasant environment. Adam changed his job to give us a better existence. I’m not really sure how I ever flew a solo ship when it’s hard with two adults to three kids. The opportunity to have breakfast together as a family and dinner each and every night is so special. I’m so grateful for the life Adam has provided for me in so many ways – most of all by just being present 🙂 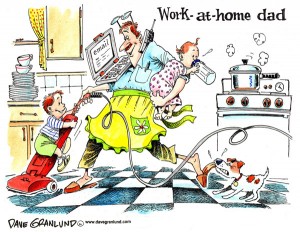